I want to reiterate what someone else said that at some point, the nerfing needs to stop. You will never reach a balance point by nerfing everything, you'll just enter an endless cycle of trying to nerf things that were fine until their counters got nerfed. When you have a problem with something that's imbalanced, you can either nerf it or introduce/buff its counter. A nerf takes care of the problem passively, at the cost of reducing build diversity and skill. A counter takes care of the problem actively, at the cost of getting complaints.

I personally never supported any nerfing, instead i keep suggesting for each ship line to be given a specific, tailored, better suited Tech Three and modules (including weapons and counter-measures).

Some are more mobile, designed for maneuvring (in particular Dreadnought of the Oberon line), they need specific short range defense with much lower main gun dispersion to allow them to play their intended role to the full, while being able to retain their mobility if not increase it slightly.

Instead they are so vulnerable today that they can't even leave a pack without turning into vettes XP feeder, they are the target of choice anyway in regard to their low HP even in a healball, i got one-shoted in my Lorica by a Nuke like a vulgar Healer, it's that bad.

Some of those ships are just under-developed right now, nerfing is not going to improve the game as a whole, just provide with a situation for one particular issue and we don't know the repercussion of those nerfs yet.

There are 3 distinctive lines they need 3 distinctive Tech Three, sets of modules, weapon integration etc, so as to tailor their offensive and defensive capabilities and defense layers to their intended design roles. (Tankers, Multiroles, Fast attack/support).

That's also how they can bring diversity, creativity and dynamism into the game, right now its 80% healcamping biased.

A better solution for the repair autobeams is to just remove one of the beams.

The timer fuses is a horrible idea because it introduces a new variable: minimum ranges.

im not a real "numbers" pro, but i have a clear feeling towards balance.

After i read the new patchnotes, i kinda regret(ed) that i have spent money on the game recently. For me this Patch feels like an attempt to "casualize" the game. More standardization, more equalization. As many players statet before, there are ways to counter or avoid nearly everything. The problem always was that you could no properly adopt to enemy strategies with only one loadout allowed. In my eyes you need a minimum of three different loadouts per ship to have the chance to stay with ur prefered ship AND be able to help your team. I heard, that multi-loadouts will come. Question is when!?!

Some ideas behind that patch are ok, nothing that really thrilled me. But the "arming time" of some modules - Goliath especially, doesent feel well thought. I need my Goliath sometimes to be ready instantly. For example: I see a ram can approaching me, i realize i will get killed inavoidably - i launch goliath and nearly immediatly activate it to kill the attacker with me. Wont be possible any more. I do a close flyby to a busy target and launch goliath within 600m, run fast and let it explode within the next 1-3 seconds. Wont be possible anymore. And so on ... a better change would have been to not force it to come outside one side of your ship but maybe below.

I prefer the idea to give different ships and manufacturers different tech trees instead of making all same same.

And now to the other patch criteria i dont like. Starling nerf is too hard, repair autobeams nerf is too hard, beam amplifier energy drain is to high, Kinectic armor amplifier nerf on dmg reduction is too hard.
I dont want to play overwatch with spaceships, dont let the game feel like a "saloon brawl" with a kill/die/respawn meta.

“I’ve seen things you people wouldn’t believe. Attack ships on fire off the shoulder of Orion. I watched C-beams glitter in the dark near the Tannhauser Gate. All those moments will be lost in time like tears in rain. Time to die.”

Everything looks fine to me.
Game become better for sure without retarded modules that allow to break up teamplay advantage - like starling or storm missiles. Teamplay should be countered by teamplay only (not by someone with press-x-to-kill button) - that's the idea of balance. I hope after update former OP damage modules will become what they meant to be - good in a pair with other debuff modules, like pulses or tartarus.
Loading time is not a bad thing for making players use modules as they were intended - ones for close range and others for long range. This will force players to use other modules, which were undemanded because of multi-purpose abilities.
Standartization - just a logical thing to do.
Tactical healing abilities nerf and offensive pods buff good enough for slightly decreasing outhealing counterplay, but keeping tacticals role ingame. Im sorry to say that, but im not considering "healing ball" a problem in this game, since it has a lot of debuff modules that stay unused because of people stucked to damage abilities. And if spider-tank (eve's term) is a sort of teamplay, it should be countered by teamplay - like using debuff+damage abilities combo, or focusing right targets.
After all, this game is about BIG ships and FLEETS, which should be able to survive for a long time, take enormous amounts of damage (compared to fighters), and back up each other. Not just rushing forward in a crazy one-shot death carnaval. Captains should command their ships and think tactics, not turn steering wheels and rely on reflexes.
Thats what I like in Dreadnought. No other game offers that now - most of them are stupid "dynamics-over-everything" type, or low-graphics tactical turn-based games.
Please, keep The Fleet meta.

Its not too late to include the Missile Repeater accuracy fix. Please.

dreadpony#0823 posted (#post-174924)
After all, this game is about BIG ships and FLEETS, which should be able to survive for a long time, take enormous amounts of damage (compared to fighters), and back up each other. Not just rushing forward in a crazy one-shot death carnaval. Captains should command their ships and think tactics, not turn steering wheels and rely on reflexes.
Thats what I like in Dreadnought. No other game offers that now - most of them are stupid "dynamics-over-everything" type, or low-graphics tactical turn-based games.
Please, keep The Fleet meta.
dreadpony#0823 posted (#post-174924)

After all, this game is about BIG ships and FLEETS, which should be able to survive for a long time, take enormous amounts of damage (compared to fighters), and back up each other. Not just rushing forward in a crazy one-shot death carnaval. Captains should command their ships and think tactics, not turn steering wheels and rely on reflexes.

I'm afraid you're missing some points of the design goals of some ships here...

There are 3 different lines of ships, so a Dreadnought with only 56.26% of the HP of a Jutland can detach from the "Team" as many players sees it.

The Oberon Dreadnought are far from the definition you give of them, so we will see if they beneficiate from those changes without loosing their mobility and offensive capabilities or becoming XP feedrs for Corvettes, which his what they should be able to do because designed for this purpose in the first place.

As for "Dynamic over everything", the games i played most are of the very similar trend static before everyting, heal camping is very similar to other forms camping...

A better solution for the repair autobeams is to just remove one of the beams.

They did exactly this, possible heal output got halfed.

However with multiple beams they can still work as a "group-heal".

When does this update get implemented?

What i have seen during the last few games made me sick, seriously locked up games around healballs, and i'm playing an Athos which i didn't even know i could out of Proving grounds 4 games ago...

Some guys commented that it had been the same all night and it was pointless to play completely agree, win or loose, let's see, TWO sets of missiles on the healer (or any other ships), guns until missile range, and in-between.

On this pic it's one of us which goes down trying.

Doesn''t go down? WTH was that? 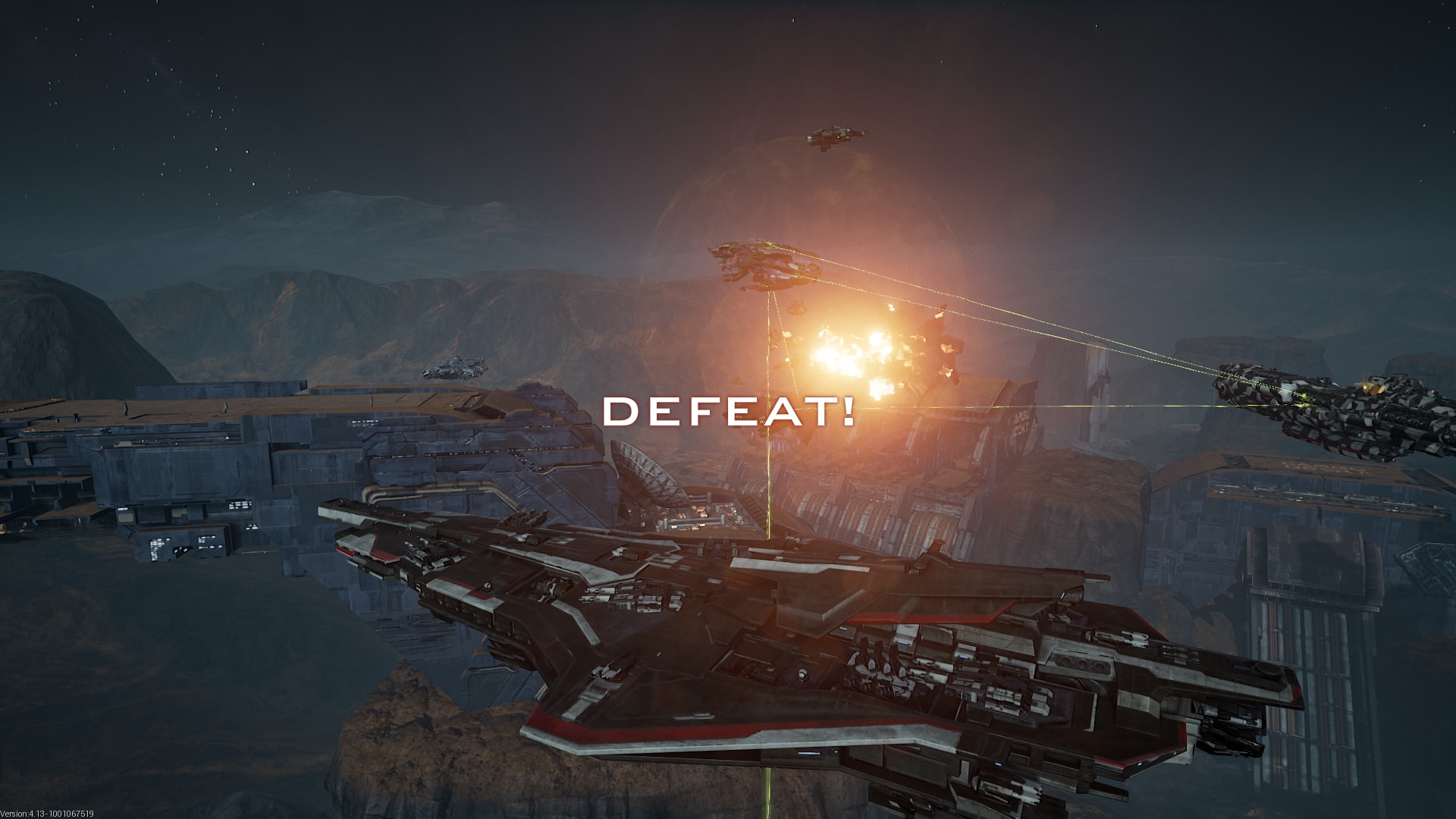 All the new arming times are misguided in my opinion. Bomb catapult shouldn't have one, the 'attack from below' while annoying was one of the only good reasons to play a light sniper, it fit perfectly with their skirmisher role. In addition, bomb catapult is one of the only good anti-corvette modules available to snipers, auto-beams do pi$$-poor damage and secondary weapons are both too low damage and too hard to hit with, especially if the corvette physically rams you. similarly the nuke arming times will not prevent players from killing themselves, they're simply too short for that. This is a band-aid for terrible torpedo launch mechanics combined with terrible maneuverability. On top of that, it's now harder to actually use these weapons, because not only do players have to time energy-draining weapons, they also now have to account for the fact that nukes are useless for several seconds AND that enemies are now much more likely to see and shoot them down or see them and raise shields.

i'll give some credit where it's due though: good on making anti-nuke lasers useful (maybe)
-good on finally adding some meaningful differences between weapons, I hope to see missiles and torpedoes getting more 'side-grade' qualities in the future

Tip: the corvette turn maneuver isn't used because it's stupidly slow. Even if it made me literally invincible while active I still wouldn't take it. It's a maneuverability module that doesn't provide any maneuverability, enough said.

Cooldown for the Storm Missile is gonna be way too long, it might now part of the first layer of defense, i still will use it offensively, reason being, a healed target takes two sets of missiles plus guns to take down and you need both missiles for offense and defense.

So if you go in a hit and run and you have a ship on your back after jumping (if you can at all, campers are very good at focuse fire since what they spend their time doing is killing those trying to unlock the healball), you need missile cooldown to be shorter than 60s.

Agreed for the trade off range vs speed that make them a real first layer defense system, but it shoudl be available earlier.

Something else, the limitation to Jump Drive use (coordinates) are often too restrictive so mobility is reduced which limit the capability for hit and runs, possible with Destroyers.

During my last game, the oppositer team didn't leave its spot all game, so we hadto take down the healers which some of us tried, Destroyers and Crovettes alike, in cooperation it can work.