Does the Surface area of a ship affect enemy fire hitting it? 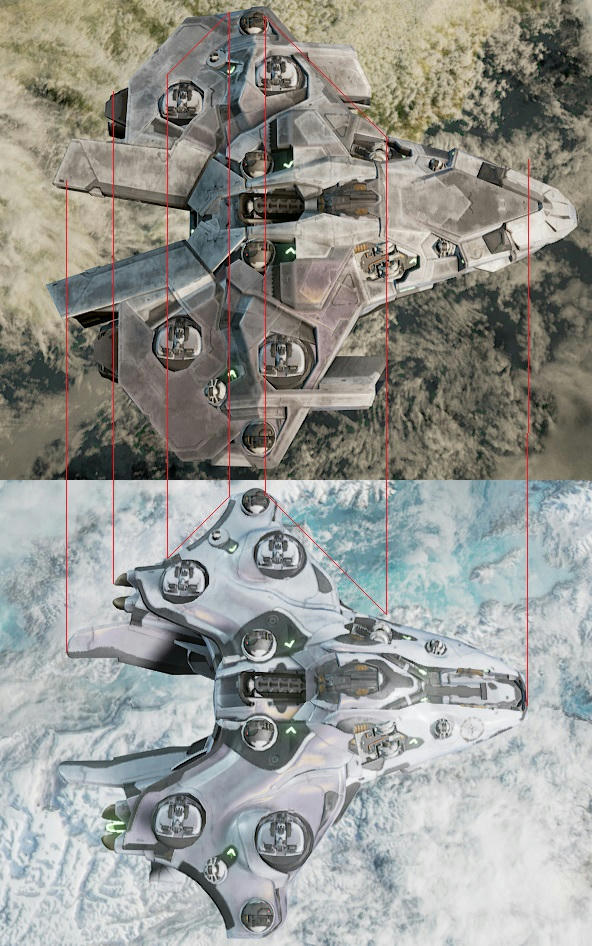 He's a fully integrated, multi-fetish artificial being. And the best part......IS THAT HE'S LEARNING.

As far as I know, you won't take extra damage on the extra hull parts.

For example the Trident skin makes the heavy dreadnought quite longer.It seems like when shielding the whole area of the ship is covered by the bubble,so normally that would mean that the hitbox is bigger also.i always had that question in my mind,would be nice if we had an official answer from a Dev here.

Same with Jupiter Arms Arty. Higher tier it's get bigger.

I think it have impact on hitbox size.

Would be great if Dev would answer.

I'm going to say yes. But then how often to you shoot just the little bit of the enemy ship sticking out? I normally aim for the biggest area.

I doubt it, because you can transmog/modify the Medusa to look like the Fulgora and vice versa, and that would mean, that just by changing your optical model, you also would get a different hit box, which would be somewhat unfair for Players with nonmodified models of the same ship.
I think, there is an Independent hitbox for collision stuff and hit detection, so that it doesn´t matter, which optical parts you choose for your ship.

I main a sniper so i spend most of my time zoomed in shooting point targets. If there is a difference it's too small to notice except in perhaps some extremely rare cases. I'm fairly certain that for ships with a significant size difference what you can see is what you can hit, otherwise i definitely would have noticed shots clipping through ship models and there would be threads complaining about it. For small ships like this i'm fairly certain that the tolerances of the hitbox for both ship and projectile are such that the extra bits don't matter.

If ship models do indeed subtly change hit boxes then probably the biggest argument i could see for it would be the strange, hovering torpedo misses you see every 10 or so rounds but that seems like a stretch to me.

I doubt developers will confirm this; they want players to use the skin they want to for looks, not for everyone to use the same smallest skin size for a competitive edge.

The problem as I see it is as follows:

Regardless, we, as players should be told how it works so that we can make informed decisions about our ships. This is a pvp game up front information on something like that gives the game legitimacy if they ever want tournaments and the like.

If the attachments make the ships easier to hit then the devs have two choices:

1) Leave it as it is and let people trade vanity for handicaps. If this is communicated to the playerbase clearly, it is perfectly acceptable since people will make informed decisions. Of course in competitive play we will see the min-tier models being used exclusively.

2) Make the hitboxes uniform regardless of appearance attachments. Again, if this is communicated to the playerbase clearly, it is perfectly acceptable since people will make informed decisions. In competitive play ships will have a variety of physical configurations. The cost is that players will need to accept that they may not have hit that Outis since the nose looks longer than it really is.

Regardless of the outcome - we should be informed. Keeping these things secret does no one any good in the long run.