Lost your precious "Press-1-to-Kill" button?
Anyway, try using goliath. Its even more scary for enemy fleet than storms when used in pair with someone.

Bad update. Some whiners make devs nerf Nuke Salvo and other useful modules just because they didnt want to use brains, shields, countermodules, and get good.

Its very nice of you to share your game experience after playing a ship once, but its better to use sources of objective information when it comes to helping other players. Misinforming isnt helping anybody at all.
Medium artillery is faster, smaller, and tankier than heavy. 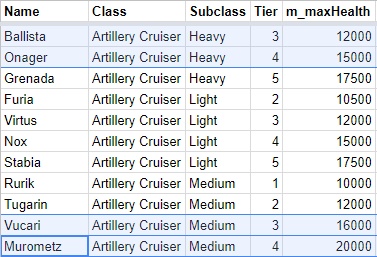 Jupiter Arms... can take beating comapred to the other lines.

No it cant. It has less HP than medium arty. And because of bigger hitbox and lower speed it's much easier to hit Heavy than medium, so it needs much less effort to kill.

Corvettes are weak if you know how to counter them. In short - map awarness, debuffs, teamplay.
No other ship is more vulnerable than corvettes, actually. Players are just ignoring them because of small size and high speed (its easier to shoot at dreadnought), and become corvette food consequently.

Matchmaking is good enough. It even uses each player's mmr to make skill-balanced teams.
If you have problems with winning - its obviously only your fault.

Artillery pods were bad not only because of low damage, but low accuracy aswell.

Did you tested them before making any tweaks? This useless pod hits NPC Assault Ship in onslaught game mode only 1 time from 3-5 shots from 2km distance. And not a single hit at heavy arty from 4km distance.

Buffing its damage do nothing until it start to actually hit something.

There, what I'm talking about.

Totally immature ignorant kid made a feedback thread his own playground, where he cries swears and whines every time someone has a different opinion on the subject. Every page of this topic has several his messages all with same whining about how game should be like he imagines.

Why the kid does that? Because he's not mature person, who tolerates and respects every point of view. He just wants all world to be around him.

Сlassic example. Sure, he's got a reply for this too. But I've had enough of this. Not going on the same level with him. Ignored.

I'm afraid you're missing some points of the design goals of some ships here...

Im afraid you're missing the point of this thread.

Its a FEEDBACK topic. Not a political debates, where you make morons from all people whos opinion is different from yours.

Nobody cares about your ideas except devs here. So stop acting immature, write them in one post, and stop replying and "correcting" every message which doesnt resembles yours own.

Everything looks fine to me.

Game become better for sure without retarded modules that allow to break up teamplay advantage - like starling or storm missiles. Teamplay should be countered by teamplay only (not by someone with press-x-to-kill button) - that's the idea of balance. I hope after update former OP damage modules will become what they meant to be - good in a pair with other debuff modules, like pulses or tartarus.

Loading time is not a bad thing for making players use modules as they were intended - ones for close range and others for long range. This will force players to use other modules, which were undemanded because of multi-purpose abilities.

Standartization - just a logical thing to do.

Tactical healing abilities nerf and offensive pods buff good enough for slightly decreasing outhealing counterplay, but keeping tacticals role ingame. Im sorry to say that, but im not considering "healing ball" a problem in this game, since it has a lot of debuff modules that stay unused because of people stucked to damage abilities. And if spider-tank (eve's term) is a sort of teamplay, it should be countered by teamplay - like using debuff+damage abilities combo, or focusing right targets.

After all, this game is about BIG ships and FLEETS, which should be able to survive for a long time, take enormous amounts of damage (compared to fighters), and back up each other. Not just rushing forward in a crazy one-shot death carnaval. Captains should command their ships and think tactics, not turn steering wheels and rely on reflexes.

Thats what I like in Dreadnought. No other game offers that now - most of them are stupid "dynamics-over-everything" type, or low-graphics tactical turn-based games.