The unspoken elephant in the room, from recent news, is the amount of people allegedly worked on Dreadnought development compared to quantity and quality of that work results. Some people here are pointing out, that is gonna be ok, because 150 of that 200 employees is still here. While the actual question is, whether those developers are even capable of doing the hard task ahead.

When I heard that this game is developed by small team (which correspond with the speed work was done), I imagined 30-40 people, maybe less. Two hundreds developers is a lot of manpower, about a half of what AAA titles have. What all those people was even doing, exactly what? How can we even expect this game to be miraculously saved, with that poor work organisation?

Another thing that need to be pointed out is interaction with players feedback.
Was the new things added, which alpha state players wanted to be implemented? No.
Was the changes done to game aspects, that was pointed out by players as in need of changes? No.
From the changes that was actually made, how many of them was about things pointed out as needing improvements? Few to none.

With all that in mind, how can we realistically expect positive changes in the future?

That news about in doors mood in team and overall organisation explains a lot.

That link is not working for me. 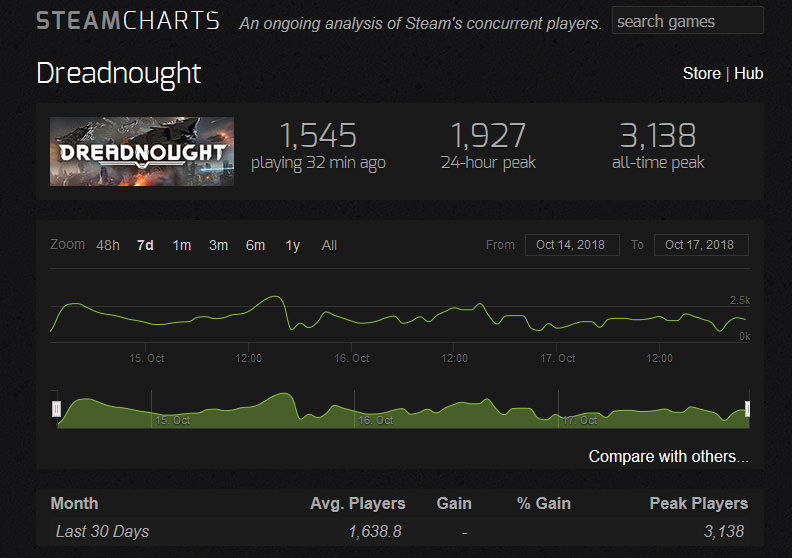 That's how it looks, connection issues hit player base hard, that's why lots of people had under hour playtime.

Brother Belial#4215 posted (#post-226595) said:
If you look at the negative comments most are from people who have played under an hour.

Lots of people had under an hour playtime, because they experience connection issue.
C'mon Man, just look at playerbase numbers (the link I posted) we are not gaining players, because they cant log in.

Topic: Thoughts on the UI

My personal biggest issue with UI was "Play" button hidden underneath some secondary info panel, which needed to be slided back and it doesn't even look like it can be moved.

How someone could even think that making the most important button in entire game hidden is a good idea? Especially that it's not "just some button", its the one and only way to start a game, if you can't find it, your not gonna be able to join battle.

It might not be enough for some people, but that's game development for you.

Problem is, a lot of people don't know if it's good enough or not because they can't log in. If you look at steam chart https://steamcharts.com/app/835860 player base is not growing, further more amount of logged players is lower than this 3k small peak we had in day 1, not because players don't like the game, but rather because they can't even try to see whats up. All of that is reflected in comments which are currently sitting at 44% positive.

I remember only one big space themed game that goes down in reviews so fast and it was No Man's sky, which becomes a meme.

Topic: Is there somewhere full list of captains modules/implants?

List made by Daganisoraan is very helpful, that's what I was looking for, thank you.

The big question is, why this comparison isn't provided by some in game chart? In general numerical amount of data in Dreadnought is less than 1% of all data in lets say EvE Online (much less), but somehow developers manage to made an non-intuitive UI that feels like it actively trying to fight back against players and hide information on purpose. It really need to be reworked.

Topic: Is there somewhere full list of captains modules/implants?

Recently I reached T3 ships and started playing in veteran matches, so ability to equip improvements for my ships captain become available. However i do have a problem finding those upgrades. Some of them are shown, one at a time, in ships tech tree, but to even compare them, you need to remember which one was where and know them all in advance. That method is far from optimal.

Is there a menu, list or something where i can look at all captains modules at once?

Topic: Upon crash or logging out, all ships and credits are lost

Logged about 15 min ago, my yesterday purchased t2 arty is gone, so "hot fix" from hour a go didn't fix the issue for me.

I made this because i had heard this issue was fixed.

It's definitely not fixed. I bought t2 artillery yesterday, come back today to play with it and it's gone. Now I lost any motivation to go forward, because what is the point? earning credits for t3 and above ships take a looooooooooooong time, if this can just disappear then screw it.