But that is exactly the point I just made. Of course, there is lore, you have to get the different manufacturers from somewhere after all. (Wargaming doesnt need that, because it takes historical vehicles.) The difference is that the Fractured Space lore is irrelevant to what the player does. The only impact it has is in the way premium ships and such look. There is no moron talking to me in my shipyard like I'm a 12-year-old going out to play when I take my million-ton-warship and my 1000 crewmembers out to kill stuff. My Captain doesn't do retarded poses at the end of the battle because he apparently fancies himself a joker. There are no tutorial missions or some such talking about Shitley Bay. And have you seen Fractured Space marketing? It's only ever about the gameplay. Whereas I just completed a survey trying to push the Sinley-Bay-Mercenary stuff as the major factor in Dreadnought advertisement.

The difference, you could say, is: Fractured Space has lore (interesting, well done lore) for those who go looking, without pushing it into your gameplay experience (Visuals disregarded), whereas Dreadnought pushes the worst part of it's lore aggressively (in a way that I can't get around). That's all there is to my beef.

A fair point, and one I can understand.

On another note, there's another mention of this mysterious "survey". What is it, and where can I find it? I'd love to take part.

On a side note, I finally figured out what I'm looking at in your signature image Enterprise. Would be a brilliant concept indeed.

Compare the t4 morningstar hero ship with the t5 zmey. It's the same there.

Really?... What a cheap copout... Setting aside that hero ships are notoriously expensive in the first place, is this how founders are treated? This is disappointing...

Topic: Am I Going Crazy??

The founder ships are from when there were no tiers. When they decided to kill the game that we had supported at the time by introducing the tiers they also had no qualms about using all the existing founder parts for the T5 versions, minus the figureheads. They later also introduced renamed copies of the founder color schemes to the market.

A really good (albiet frustrating) thing to know, thanks for the insight.

That still begs the question though, why aren't the other t5 ships the same? The Silesia hero ship looks nothing like the Stabia, nor does the Morningstar look like the Zmey. Maybe they're going through all the t5s and remodelling them one by one? I SINCERELY hope this is the case, the fact that the Mithras is a cosmetic twin to the Outis angers me to say the least...

Topic: Am I Going Crazy??

Or does the Outis body kit look EXACTLY THE SAME as the Mithras???

The Outis is a PREMIUM ship, and a founder one at that. Why does it look identical to the Mithras??

Is this a glitch, or is it really truly like-for-like? It's a total joke of a hero ship if that's the case...

These images show my Medusa with a full Outis body kit alongside the Mithras. I have reset the game and switched the ship being viewed multiple times. 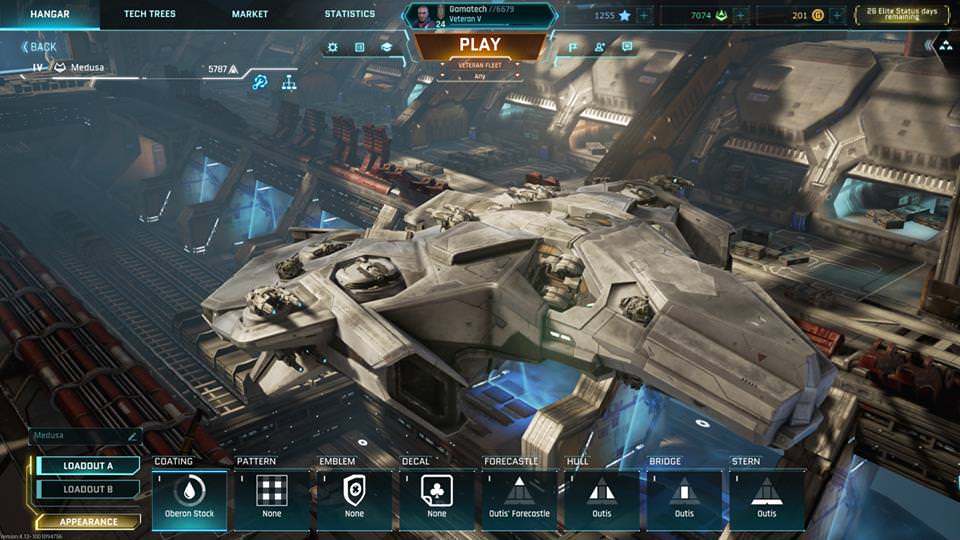 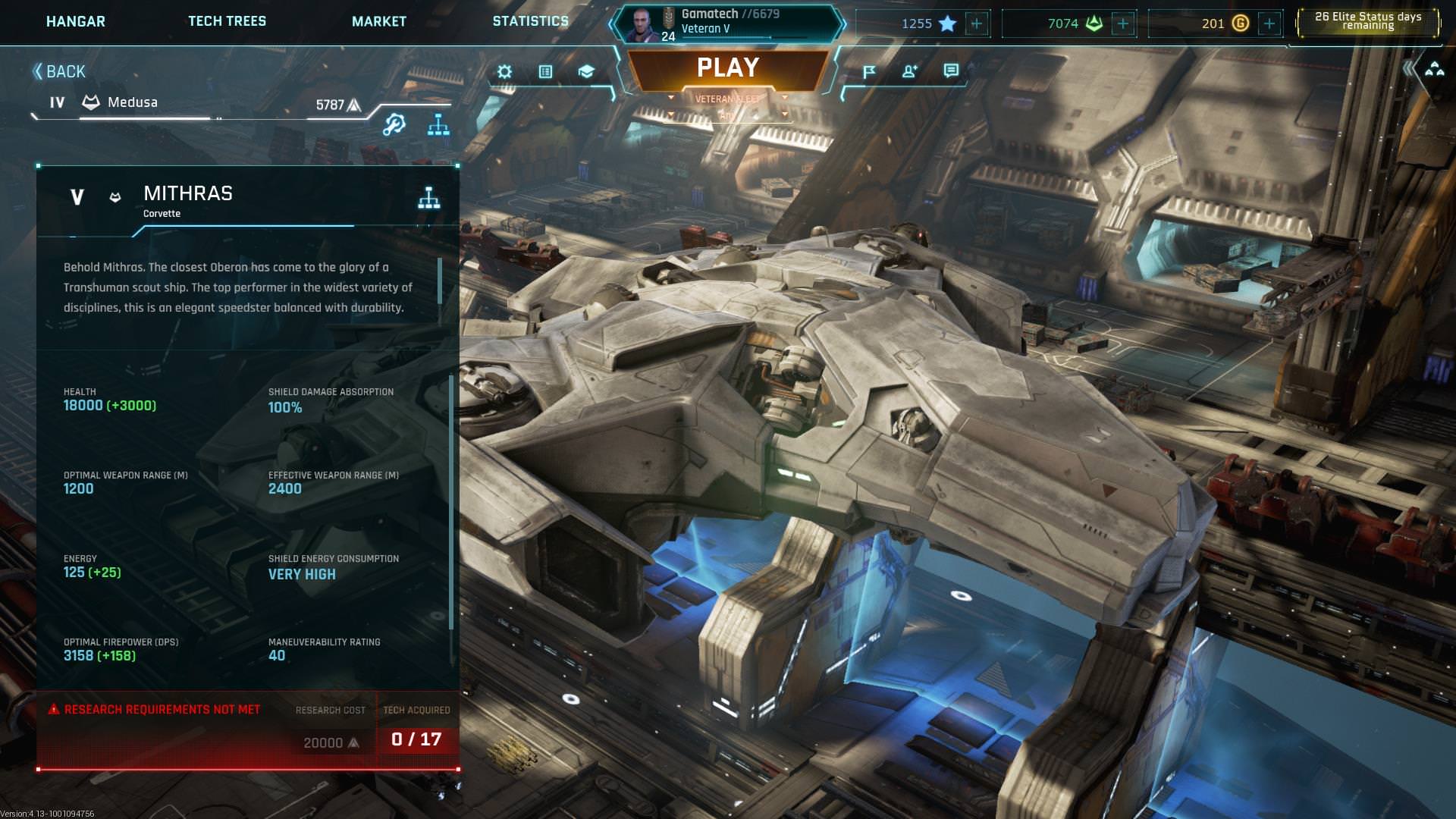 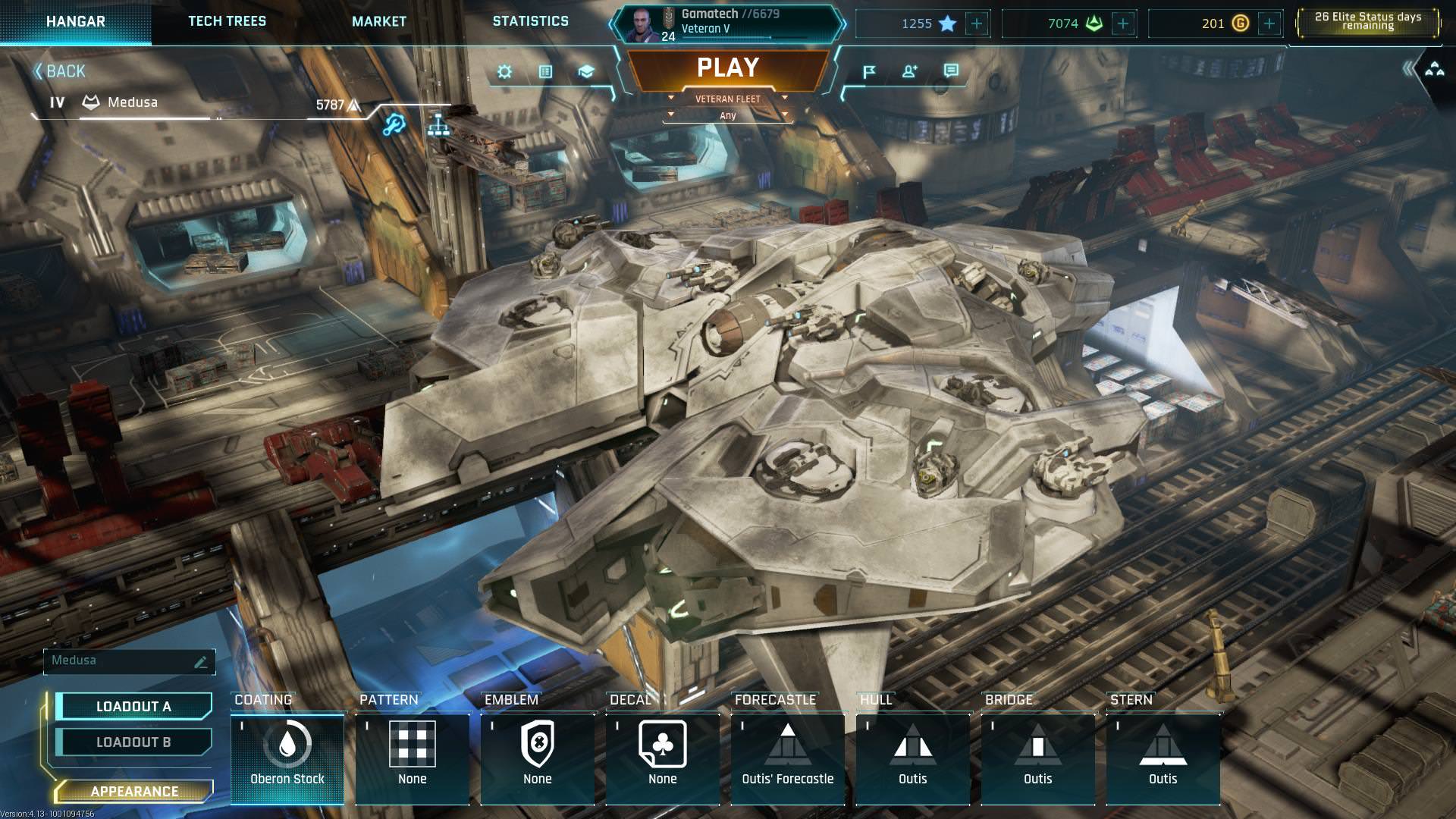 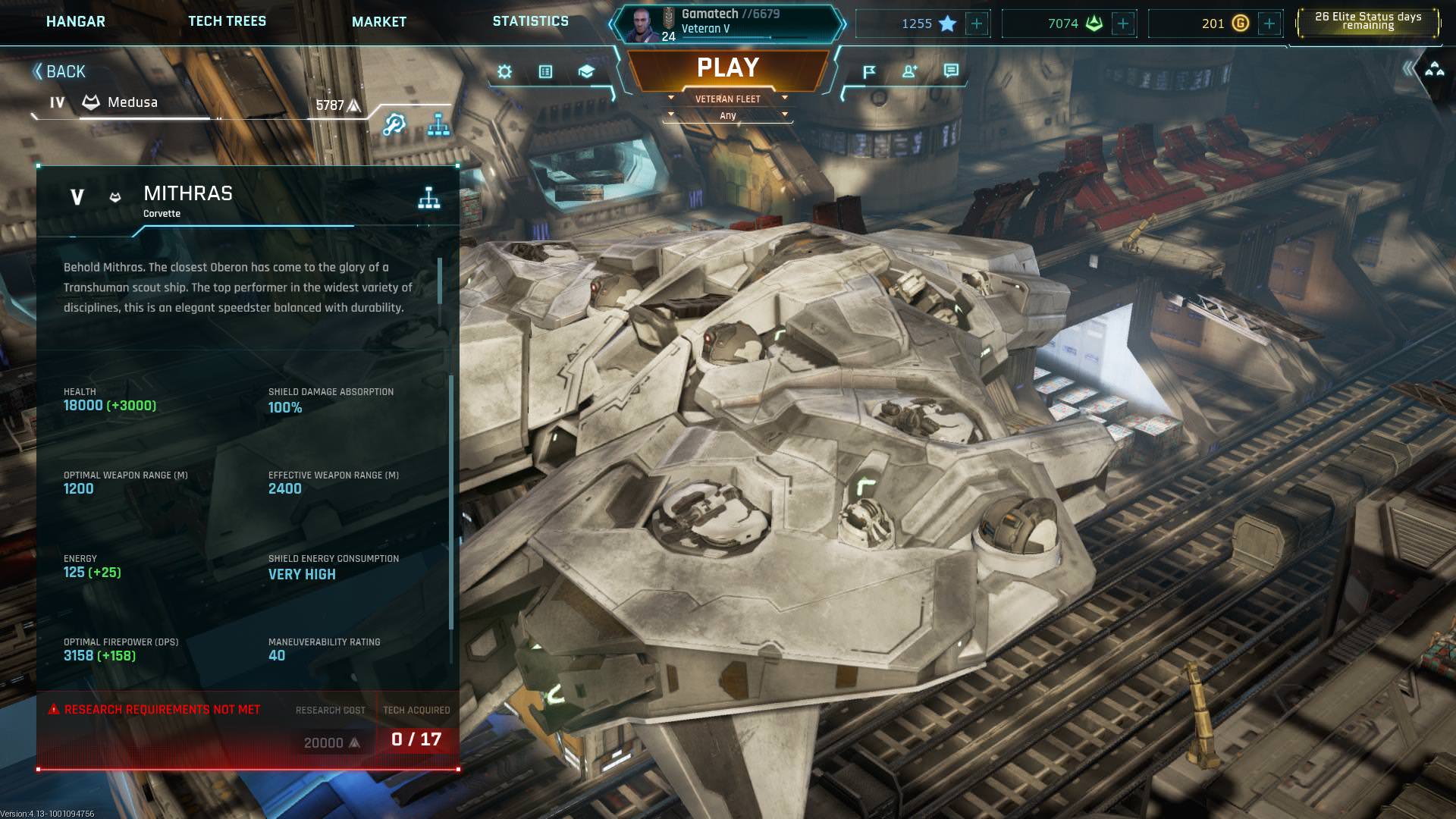 Am I seeing things? Is the wrong model loading in? Or did I really spend cash-money on something that I could have got for free (assuming I put in the monumental grind)?

Why do all of the other available hero ships look so distinctive and unique, while the Outis is more or less a recol... You know what, it IS identical, since the textures are from the coating and not the body kit!! It's even LESS than a recolour! D:

I understand that hero ships also allow you to try out late-game modules, but even with that taken into account the Outis falls entirely short of every other hero ship in the game. It's only half the value! What's going on????

EDIT- I have afterburner equipped on my Medusa, hence why there's an extra thruster.

Why are the devs not responding to our comments, I get the impression they feel they are too good to do so. This legendary issue really needs to get fix (why bother levelling and spending money to get to that class?), making me not play the game and brings me to the other three large issues,

How expensive things are in general - people don’t mod because they don’t want to spend £20-£30 a month on playing the game, Id sink a £5er maybe £10, but with Elite as well now chance. Which raises another issue, what’s the point of getting to Legendry Status, as no plays it?

The ultimate and complete pain in my ar53, the terrible match team balancing, I mean if you must move people between Teams do so automatically before the games in lobby, so they are closer matched and way more fun.

You guys are killing your own game, I played this game day in and day out for months and spent I’m guessing £20 a month, I refuse to do this any longer. Give something back to the community and make character and ship upgrades free or earned with time spent playing the game, so at certain levels. Also your character artwork and design is so s.h.1.t, I’m me, what’s with he stupid goggle options, have you guys ever look at any other games? Look at "They are Billions" small Indi game, with epic design sense.

Look, I know it may sound like I don’t like he game, but I love it! It’s been months and months and the basics are still broken, get this fix and they game will take off, if not you will lose another big fan.

The only pressing issue the game has in my personal opinion, is the way hero ships are executed. First off, they're ludicrously expensive- especially paired with the fact that they don't help at all in progressing your tree. The only real use they have is their cosmetics and as testing platforms for modules. But with that being the only thing on the table, I feel it's ridiculous to price them based off of tier. There's literally no reason to use them, and the cosmetics are arguably at the same standard. So why do I need to pay £8 for a giant shark head at the end of my Dreadnought, but £40 if I want a gorilla?...

That sort of overlaps to the other problem with hero ships. There's absolutely no purpose whatsoever in earning their XP other than to convert it to free XP, which costs MORE MONEY O.O I JUST PAID UP TO £40 FOR THIS SHIP, LET ME USE IT'S EARNINGS!!!

But Fractured Space DOES have explanation XD There were different factions throughout the galaxy. The Alliance of Independent Worlds, The Foundation, Talon Cluster Accord, The Purist Cooperative, and the CPPAL (I can't even begin to remember what that stands for).

Eh, come on Mr. faction leader, even I remember that (because it was funny) : The Collective for Protection and Promotion of Artificial Lifeforms.

Don't need a datamine for that I suppose haha XD

What is this "survey" I keep hearing about? I'd love to take part

I can't even begin to fathom how many pages upon pages of official lore there is, it's all on their website. Granted, you can't view it in-game. But the lore is there, you just have to look for it.

I am aware of how much lore there is, and as I said, I don't mind most of it, although don't care either, because unless you go looking for it really hard, you won't be able to find it. So it leaves most gamers with just what they can experience through gaming. And that is pretty much just Sinley Bay, relegating the rest of it to a level akin to Battlefield map descriptions.
And I stand by my point. It doesn't matter ow much great lore there is, the Sinley Bay/Mercenary part is ridiculous. I'd much rather have it the way Fractured Space does it - Without explanation.

But Fractured Space DOES have explanation XD There were different factions throughout the galaxy. The Alliance of Independent Worlds, The Foundation, Talon Cluster Accord, The Purist Cooperative, and the CPPAL (I can't even begin to remember what that stands for). There was a massive war involving AI, their rights, what does and doesn't count as "life" and extremist groups. The CPPAL alone was a faction fighting for artificial rights, almost like a charity. If you look at each of the personal career progression options in the game, it even gives you short story segments of certain skirmishes and battles as you progress. They even go as far as to give you locations as to where they occurred.

All of this isn't even considering what the devs said about the manufacturers. Zarek is akin to the Russian Federation, and started out before the war as a mining equipment company. USR was an exploration and research facility, and Titan was a warfare based producer.

Even each of the ships have their own story. My personal favourite is the 426 levi and it's jump drive malfunction mid-battle. The Ghost's first prototype, the Phantom. The Revenant Reaper and it's multi billionaire owner spending years trying to track down an aftermarket chop shop willing to take on a capital ship project.

Plus there's a whole new recently announced game mode coming in the next update that actually REVOLVES around the AI uprising. We get to see more of the battles and possibly even more of the factions.

Much like Dreadnought, the lore is there. You just have to look for it

I also regularly get fps variances in the menus. As OP said, more of a frustration than anything else.