Hello again, I finishsed the starter fleet of UCM I got awhile ago I just forgot to post it here. sooooo here it is!

If this is the first time youv seen it then allow me to explain, the Stellar beekeepers coating with the macteera pattern combination is my favorite from the game so I decided to try my hand at painting it. Im not a master painter, just an average one so dont expect an Eavy metal team sorta quality from me.

Painting a color scheme like this is a little hard, but not the crazyist one I've done. There is still room for improvment in my exacutuin of the color scheem, but I am very happy with the results and look foreward to expanding this fleet so I can paint more kinds of UCM ships. I only have a phone cammera, so the photos wont be of the highest quality. They look even better in person.

For those who dont, and want to know, these are Dropfleet models, its a tabletop wargame game made by Hawk games, now owned by TTCombat. Just google it ya cant miss it. This is a UCM Starter fleet, with a Remnants Centruion(minor converson from keel to dorsal gun mount), and two kitbashed santiagos (UCM Friage sides-Taiapei). I love dropfleet/ dropzone, totaly recomend them if your into that sorta thing.

This whould be a massive post with like 33 pictures, so I'll just link it and show the refrence and fleet pictures, if you want a good look youl have to use the Album link.

Thanks for looking, hope you enjoyed it. 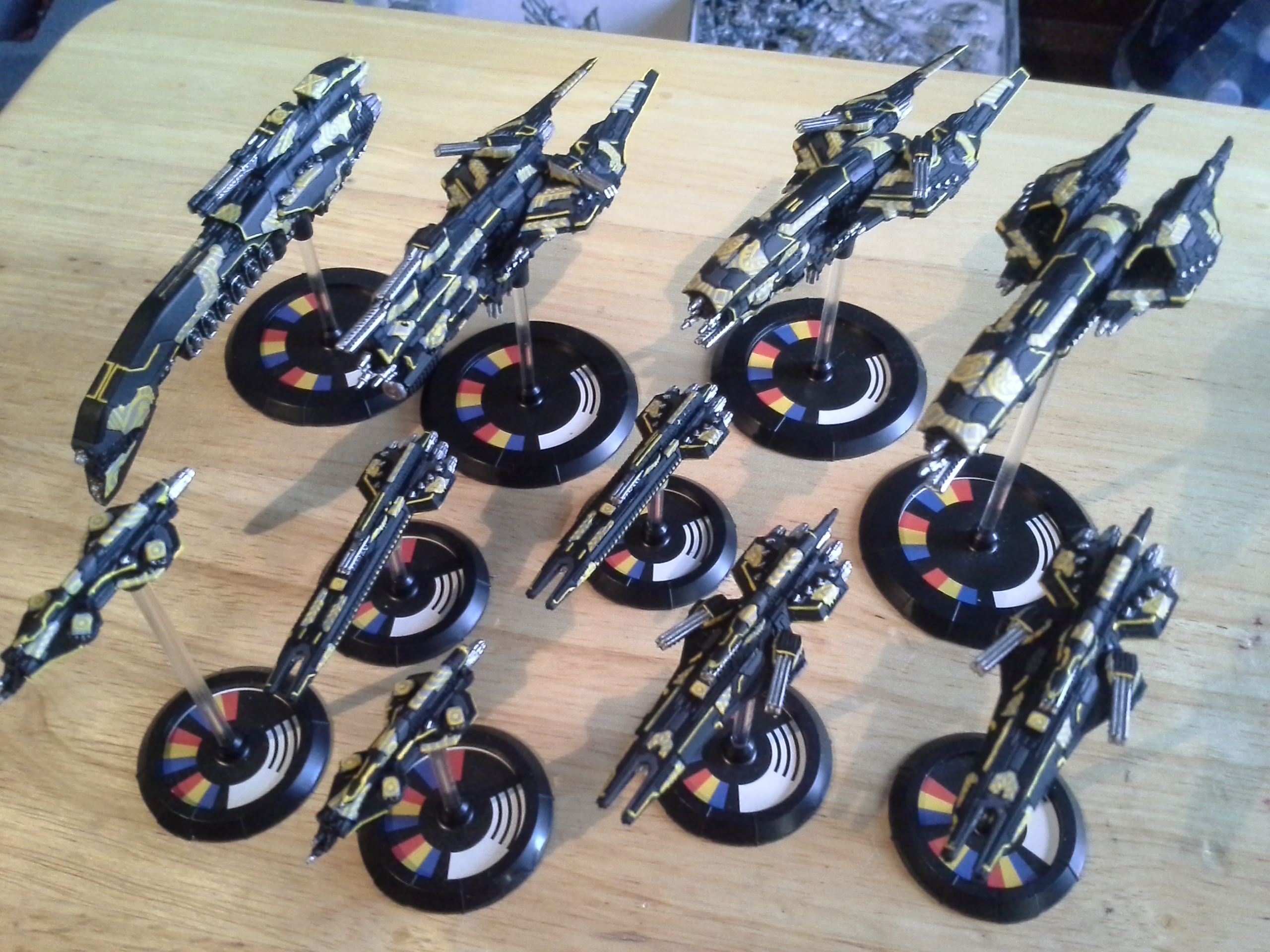 So when i first saw this thread (pre steam release) my reaction was why whould you want to not listen to the great soundtrack Dn has in game?

It perfectly captured the feeling of the game, and that was always my number 1 kudos to the game, nailing the soundtrack that you play to in game, IMO.

I was excited when I saw they were finaly going to release the soundtrack on steam.(soonish)

I literaly just got out of my first steam release match, and now it Sounds more like something Michael bay whould use when he reveals a new trasnformer in the movie trailers. Gone was the epic bombasic grand spaceship battle music that evoked the feeling of the game so perfectly, and all that was left was the "bwaaaaang" noise and some "tense" atmespheric music that tries to make Dn sound dark and serious. It was really Jarring and depresing to hear, completly took me out of the experiance honestly.

Had I known they were going to gut the soundtrack in adition to the gameplay sounds like wepons and lasers, id of recorded some gameplay with only music on kept a file for myself to listen too when I played, or even when i just felt like it, but now I cant even do that.....

Now my reaction (post steam release) is: Dose anyone here know were/how to obtain the pre steam realse music from Dn? I deeply miss the beutifull music it had.

So I persoanly love the look of macetra pattern with Stellar beekeeprs coating, so much so I decided to try my hand at painting it on one of my dropfleet models.

Im not a profesional paintier, so dnt expect the world from me, given how small it is its rather hard to perfectly replicate the look on a models, but im pleased enough with how it turend out to show it to you.

So heres my space hot rod, aka the vindicta with relevant colors/pattern that i used as a refrence .

And heres what I ended up with, barring in mind I only have my phones camera to take pictures with.

The model itself is a converted Centurion if you were wondering. I do think there is alot of room for a cleaner paintjob and in how i painted the yellow detailing, espeicaly knowing how im going to paint each panel that needs detail before i actulay start painting, ya know haveing a plan insted of just going with it whould make it look a lot better. Still really pleased how it turned out, enough that i want to paint more ships like this. But I dont actauly play UCM, but im considering getting a UCM starter fleet and painting it like this, if nothing else it makes for good eye candy in a dispaly case. the picture dosent quite do it justice, you realy gota hold it in your hand to apreciate it the most. 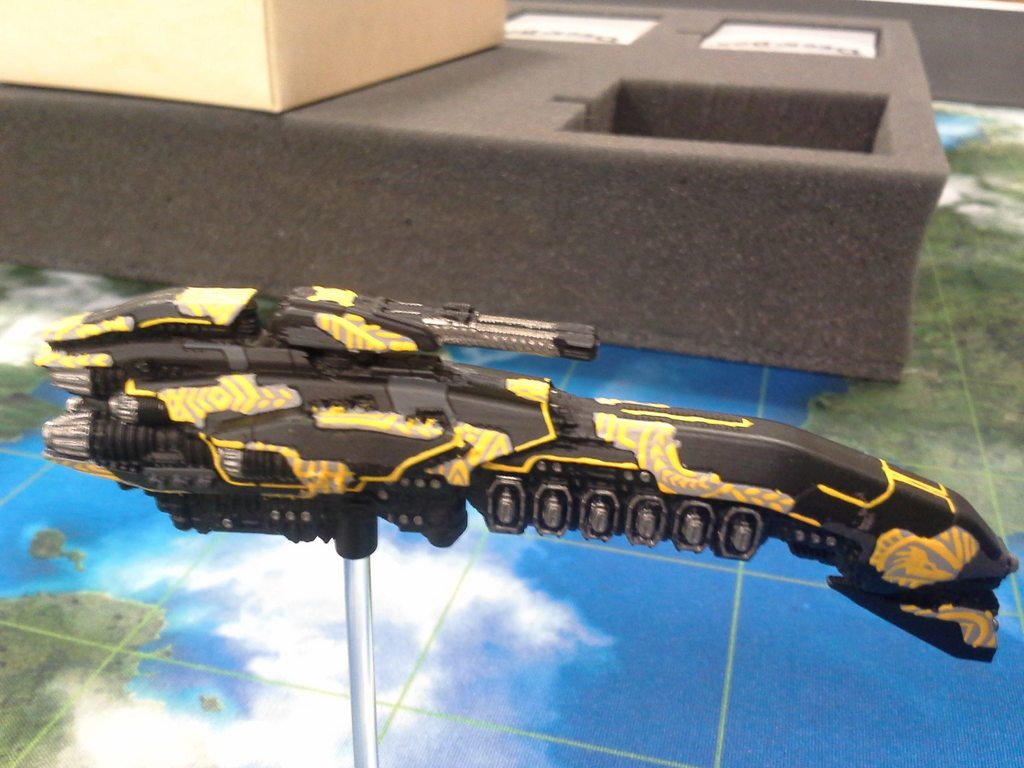 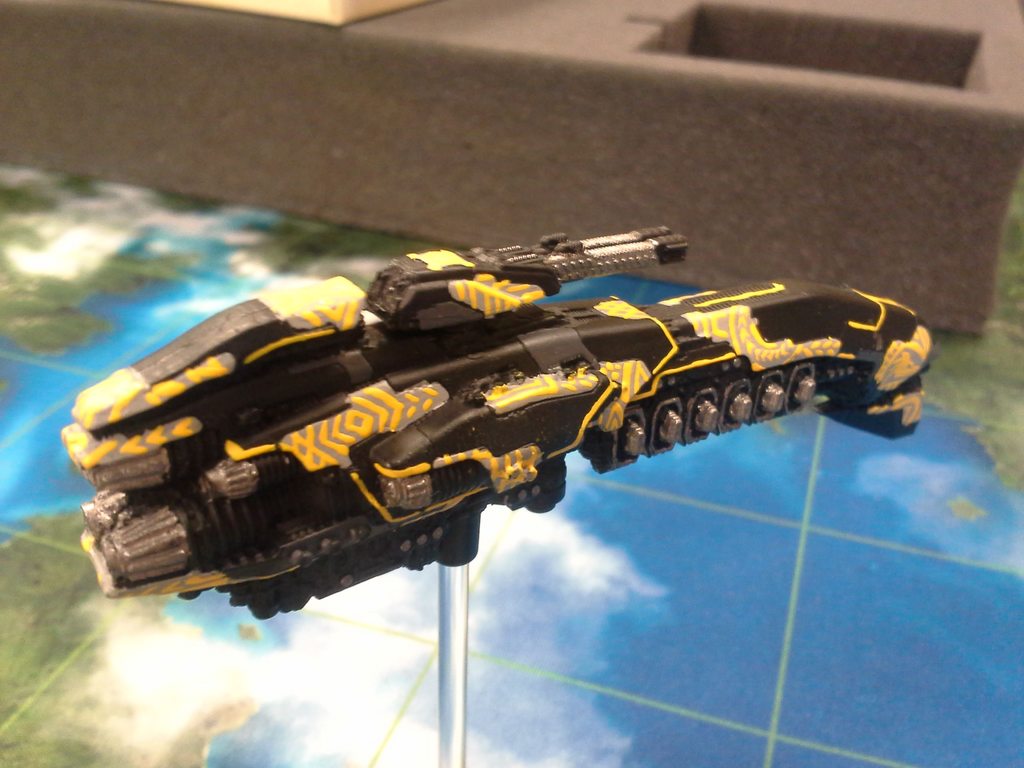 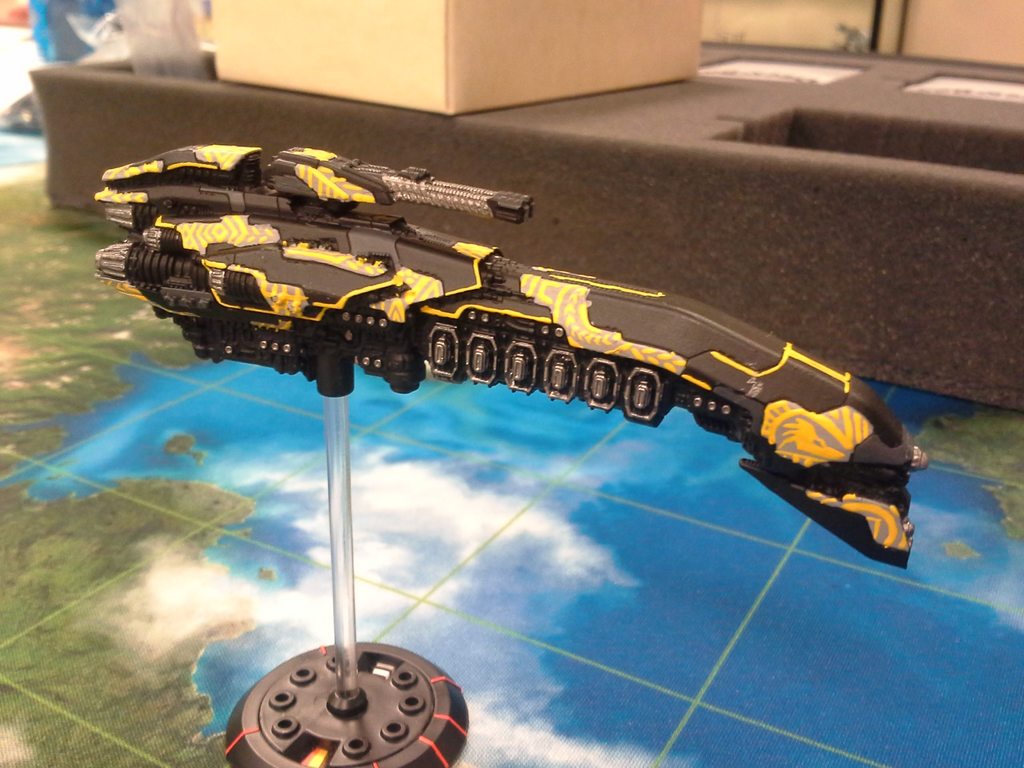 well i hope you guys liked it.

You can use modules from ships in the same tech tree, with certain caveats. I probably don't know all the ins and outs and can and cannots

For example if you unlock a T3 gravis, and buy modules for credits (at T3), then you can use them on the T4 Lorica in the same branch, but you can't use the T4 Lorca modules (at T4) on the T3 gravis, or the T3 Chernobog, or T4 Jutland. you might also be able to put the T4 ships modules( at T3 default) on the T3 verion of that ship, if it supports that module in its own tech tree.

as for buying T3 modules with credits, you can use them on your T4 version of that same ship branch. it might feel futile, but it can be well worth it, especially if you don't like the initial lodeout for the T4 ship. the first modules in the tech tree are the ones each ship comes with by default, you'll notice they are all 1 tier less than the ship you buy, your superposed to upgrade them. its not a waste of time, if you like that module.

pictures do not = stats

we just want to know what things are, how they function so we can best spend or available credits/ xp. Why is this so unreasonable? surely the statss exist somewhere in some form, how else dose the game function? we just want to make an informed decision.

Topic: I don't think I understand

I'd rather not grind for hours in one role only to get to the role I wanted to play when I installed the game.

This game isn't for you anymore

I mean this in the nicest way possible;

unrollbackable. Iv got over 200 matches under my belt, i have no ships worth writing home about. Veteran+ is a waste of time, you wait forever for one match if your lucky then get horribly beaten by T4 ships with modules, when all you can scrounge up is a T3 with maybe a module or two. My advice, just leave now and avoid the dreadnought sized disappointment this game has become.

There's a reason i don't play world of tanks, despite it being fun. Threre turning Dn into WOT.

soon i wont play Dn either.

which is sad because I'm there target demographic.

Edit: I couldn't make this up if i tried, just had a match in veteran with 8 players on each team, me+ one other T4, the other 6 players on our team were T2, In Veteran, at the start of the match.. The other team consisted of one T2, the rest were T3-T4. How are we supposed to win that/

PS: iv attempted to play veteran today, iv gone from 207114 Credits, to 207820 credits. with 5 losses out of 8 matches. I'm actually fairly decent at this game but Whatever. More importantly, iv had less fun than just playing recruit because each loss was a totally one sided punching match. So naturally the Dn Dev's decide to punish me even more for losing by making me pay maintenance, just so i can keep losing, having less fun by being curb stomped repeatedly, then having the honor of paying for maintenance again, for losing.

The Devs are caniblaizing there own game, driving people like me away who want to pay to support them, but wont pay for the BS there shoving down on us while telling us there's nothing there gona do to fix it. While also refusing to listen to reason to us beta players, when we try to warn them the self destructive path there on right now.

I reiterate, what a dreadnought of a disappointment this game is turning out to be. It used to be fun, now its much less so

that's already included in the score. I often reach the upper half or better on scoreboard when i play a tac cruiser.

This is supposed to be a bug, however they said they fixed it. Clearly not, i only looked here after seeing that it was still massively over costed once reaching it in the tech tree myself. love WPB

After reading the way they worded some of the things in the patch notes I'm beginning to think this is all a joke to them. "hah hah ha we aren't gonna bother fixing this one simple bug because its funny to hear players complain"

PS: thanks for activating my elite status even though were not in open beta yet and still playing with all the closed beta players(hint: not that many of us, i had to play against a tier 4 ship with my default three ships in recruit ). really "funny" Greybox. funny indeed

Jokes on us it seams.

Consider this signed by me as well, but spoiler alert, they aren't going to listen to you. Ben watching this game for like half a year now, decided to jump in few weeks ago since this big update was supposed to have dropped. I should have looked at these forums before i bought, i would have avoided it like the plague. The game play is wonderful, everything else they added around it is horrible and disheartening.

Furthermore, is it even possible to get a refund on the founders pack? i cant find the option for it anywhere, I' getting a serious "hahahaha grey box has your money, and there nothing you can do about it" kind of feeling about this game. Slimey. Normally I'm the whale who will make it rain getting pretty skins and stuff, But in this case they have cheated me, what iv been watching for the last 6 months eagerly on streams and youtube, is not at all what they sold me. bait and switch.

What a dreadnought of a disappointment this has been.