You know, if assault blink warp worked that way I'd be OK with it lol.

Topic: Tier 3 grind is too harsh.

Yes, I do. I presume you're implying it gets worse? I don't mind steep grinds but this one is near vertical.

The game need to be advertised first for that to happen. Ive only seen PS4 add's on facebook. Thank god your not involved in marketing.

If they did some advertising it might help the issue. There's plenty of work that can be done across the board, but allowing a range of teirs to fight together is one of the biggest. A new T3 in Vet is just painful to play. Let alone the issue (at least still on PS4, I undestand PC is fixed?) that allowed/pulled T2's in Vet matches. Even once you've unlocked your T3 modules it still feels near pointless going up up against T4's with thier comparitive OB's and modules.

So not only are you a liablity to your team as a T3 in vet matches currently, it's a steep, miserable cliff of playing experience to climb. I'd be willing to bet this is where the majority of new players drop the game. Not because it gets hard, but because it becomes un-fun.

I'd propose adding an addtional fleet/queue, in between Recruit, and Veteran, called Captain, or something similar. Going thus:

Mixing at legendary as nearly fully outfitted T4 should be able to hold it's own, and a player by that time should (generally) have learned to play. But the Vet queue would also give a place for newer T4's to level, or older ones to have a slightly less stressful game.

I also think it should be more rewarding, I played two matches today and I only got XP for one of them, which isn't a bug but a design decision. (I think I would have gotten XP if the XP made in the second match would have been higher than that made in the first match.)

Pretty much why I don't play it. No rewards, so why waste the time, particually when Havok matches can take 2-3x a normal TD or Onslaught match?

Topic: A new patch and my three biggest issues with the game haven't even been touched.

On 2, disagree. They're not meant to be long range guns. At < 1200 they have the best dps of any dread gun, and since most jutlands are warp jutlands...it works out well.

I find that hard to belive, perhaps they've been buffed in PC vs PS4? On PS4 I can empty nearly an entire clip into an Assult Ship at point blank range before it dies, whereas it just takes 2 shots from the repeaters to kill.

Were you looking at it when it was supposed to make the switch to the new contract? I think it happened to me once were I waited for a new one to appear but it started another day as well.

I may have. I know I have before and the contracts will not refresh untill I start the game, but this time after restarting still no contracts.

They showed up today at least. Thought it worth reporting since it was immediately after the maintenance patch.

So no new contracts today. Time just counted down, then restarted back over at a 24 hour countdown again. Restarted the game to no avail. No bonus credits for you! 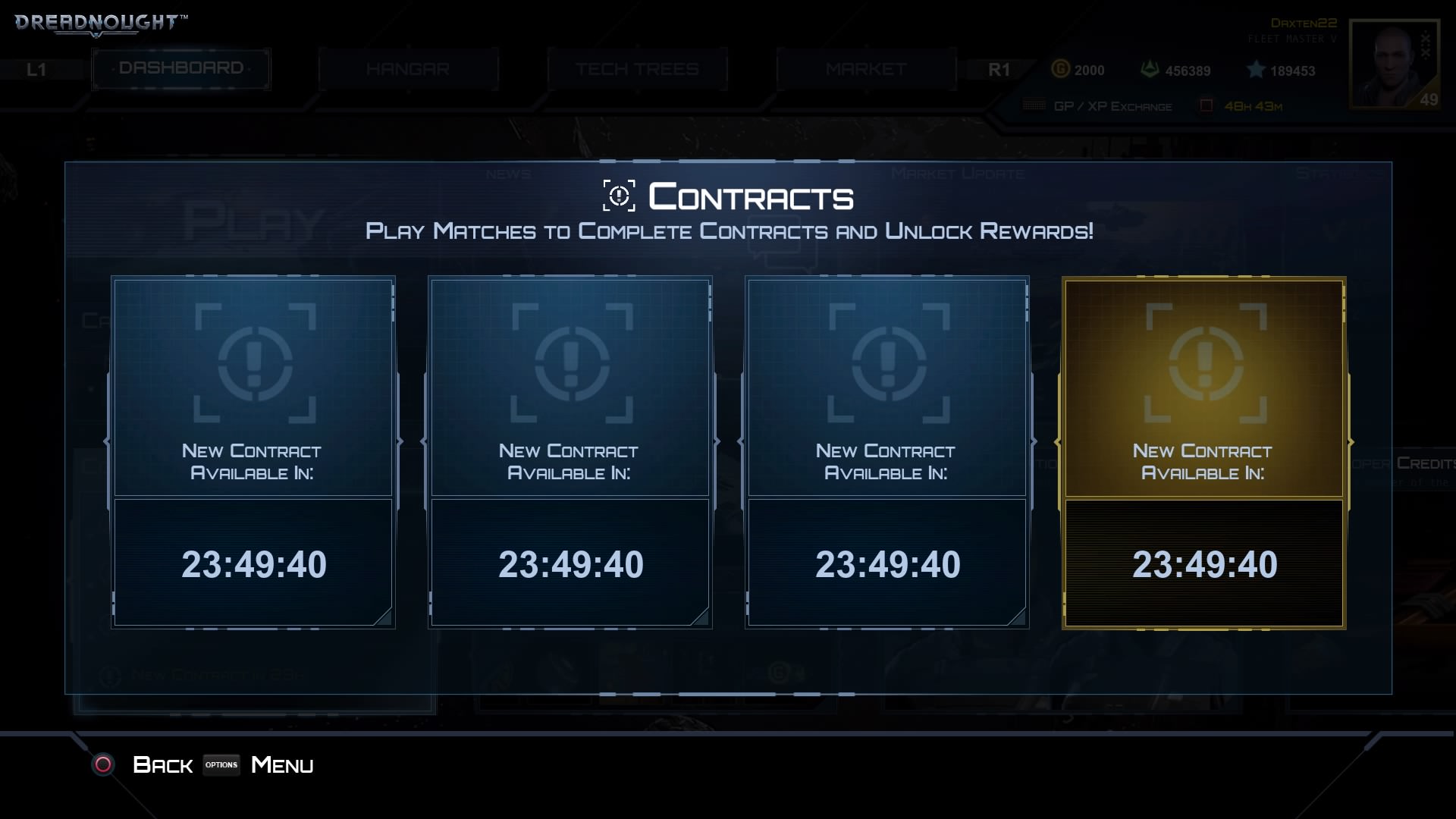 So this has happened in several matches after the servers came back up today: 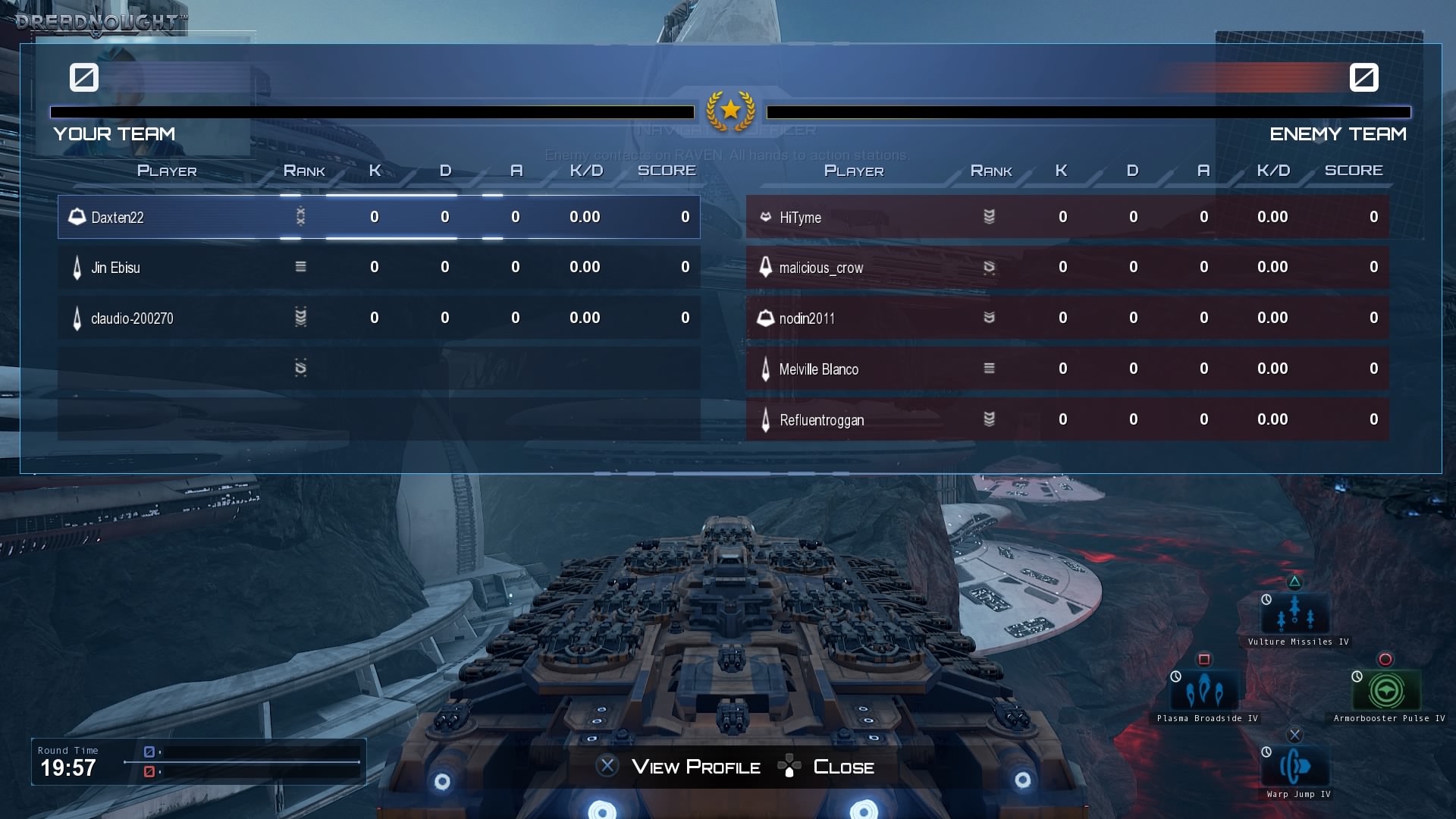 Some way of promoting a challenge I suppose? The final two slots are never filled with either players or bots.

Topic: Why i don't recommend this game to my friends

It's not a design problem, it's a player driven one. unless you know everyone of those players playing the T3's don't have any T4's. or that the other team had a squad, which is a problem imo, then what do you want people to do? not play T3's they need to level?

The solution is each teir gets it's own queue, but the playerbase isn't large enough for that.

yep. You wont lose BB on a latejoin. But you will lose it when leaving a game, no matter what.

This is incorrect, at least on PS4. I've been dumped into an ongoing game, and both lost BB and still had it afterwards (different games). Somethings wonky with how it gets applied.